Investing long term produces some advances including a reduced volatility of the portfolio and the benefits from compounding. Simply put compounding shows the power of time.

If an investor placed money into a tax-advantaged retirement account, the simple power of tax-free compounding can have big impact. Even when that account is ignored after the initial investment.

Based on these variables, a one-time tax-advantaged investment could result in a decent return over 15 years. The portfolio earned $5,394.64 over the lengthy period.

But there are more factors that could significantly increase a portfolio’s returns. One of this an increasing investment basis. There more money that is invested over time, the more return is possible from that investment. So let’s take a look at the money that could be generated with an annual investment of $5,000 (such as a contribution to an IRA). 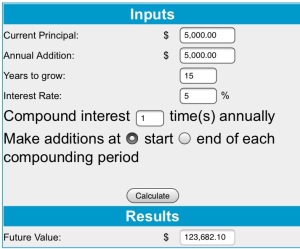 Based on the continuous annual contributions, this account could grow to $123,682.10. The portfolio has grown by more than a $100k since the initial investment. The final estimate amount is based off the combination of $80,000 of retirement savings and $44,683.10 of earnings off those savings.

The next factor to consider is amount of return the portfolio can generate over the long-term. For reference, $100 invested in the S&P 500 in 1926 would be worth $294,060.84 by the end of 2015. That extended investment period is unrealistic for most investors.

Remember that the latest 15-year period includes such tumultuous events as 9/11 and the financial crisis caused by the collapse of the mortgage bubble. Both of these events helped deflate returns over this period.

The S&P 500 fell 36.55% during 2008. But the power of long term investing helps alleviate some of the volatility inherent in shorter term investment periods.

The next factor impacting the power of compounding is the annual return. The closer we can get to stock market’s historical average annual return of 9.3%, the bigger potential returns become. Let’s asssume that we are able to achieve a 7% return over the next 15 years. 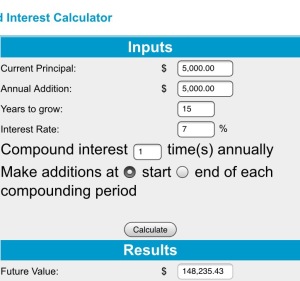 The power of compounding depends on a few basic factors: time, a growing investment base and optimal long term returns.